The Iceman; who doesn’t know him? He proved himself worldwide by climbing Mount Everest on his bare feet and also held the world record for swimming under ice for a long time. The whole world and even science is amazed at the things Wim Hof can do with his body and his meditation. And now you can also experience it yourself. You can find out the secret of The Iceman, Wim Hof. Wim Hof’s secret is now available on the internet as a course and we are going to be reviewing that product, the Wim Hof Method, today.

Who or what is behind the Wim Hof Method?
You almost wouldn’t believe it, but the person behind the Wim Hof Method is… *drum roll*… Wim Hof! Who’d have thought it 😉 Wim Hof has a proven track record for holding various records that are primarily related to the cold. He holds the record for sitting in ice again and for a long time he held the record for longest distance of swimming under the ice. Wim Hof’s statements are criticized because he draws conclusions from scientific studies that scientists do not agree with. But it still remains a fact that he can do things with his body and the accompaniment of breathing exercises and meditation, which seem nearly impossible to ordinary people. 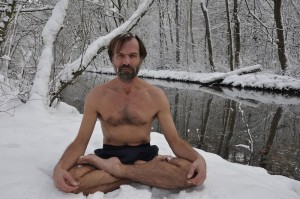 What promises does the Wim Hof Method make?
Wim Hof claims that you can unleash your inner power using his method. Everyone has it in them and Wim Hof is one of the few people who is actually capable of doing this. By unleashing your inner power through breathing techniques, you can boost your immune system and increase your energy levels. Wim clearly stresses that his method is not about curing illnesses, but only about making you resistant to diseases. Your stress levels will also go down if you apply the exercises from the Wim Hof Method correctly. It is hard to measure the claims being made, but the experiences of people who have taken this course are fairly positive, but more about that later.

What do you get when you buy The Wim Hof Method?
The total Wim Hof Method consists of a 10-week course, during which videos show you what to do. Wim is the person who, with a group of others, demonstrates the exercises and gives you tips about what to do and what not to do during the exercises. You get a workbook for recording all your results and several Bonus ebooks: the ebook The Wim Hof Method, in which he explains the principle behind his method and his book Becoming the Iceman. The videos are in English, but will soon be available in other languages, like Dutch, German and French. And finally, you will also get access to a closed Facebook group where you can exchange experiences and tips with fellow course participants.

What is the total price of the Wim Hof Method?
The price of the 10-week course, called the Wim Hof Method, is $247.00 dollars, or, €179.00 euros. This may seem like a lot of money, but other 10-week meditation courses often cost around €300 euros and they won’t teach you the special breathing techniques that make Wim Hof’s course so special. The advantages of strengthening the immune system is also something you won’t find at a regular meditation course. We can safely say that Wim Hof’s course is the only one of its kind and even that science agrees that users of the Wim Hof Method are able to influence their immune system. If you put that into the equation for the price of a 10-week course, the price is pretty good. Plus, you get to do in your own time 😉

What do others think of the Wim Hof Method?
Looking at the responses from other clients that have bought the Wim Hof Method, the majority are positive. We see responses like: “ I took a meditation course in Thailand that had less content than Wim Hof’s course and Wim Hof’s course is many times cheaper,” and “The method Wim Hof taught me has definitely had an enormously positive effect on my life and my physical condition.” If we were to go by the responses from clients, we can say with near certainty that the course actually has had a positive effect on the buyers. We also saw some negative reactions, but they were mainly about Wim Hof’s philosophy and not specifically about this course. These detractors are mostly from the Netherlands, where people are tired of all the attention he has been getting in the media. Again, this does not tell us anything about the Wim Hof Method.

Conclusion
The method that Wim uses and the claims he makes are often presented as quackery in the media, but if are to believe the many positive responses, that is far from the truth. The breathing techniques and the Cold Water Therapy that Wim prescribes definitely help you strengthen your immune system and prevent stress. If you add to that all the other extras that Wim offers at a price that is less than of the average Meditation course, we can only say that this is a unique product. The videos are clear and informative and help you to reach your goal, step by step. The goal is to feel better, more fit and more relaxed. We thought the Cold Water Therapy was a bit intense at first, but ultimately it was worth it. You body seems to get used to it pretty fast. All in all, we feel the Wim Hof Method is an excellent product.

We hope this review has answered the following questions for you:

Do you have experience with or questions about the Wim Hof Method by Wim Hof? Leave a message below!